Once upon a time in New Zealand… there was an economist, a physicist, a sociologist, a lawyer and a consumer psychologist

They were … trying to understand why people got locked in to certain patterns of behaviour in their energy use, even when it seemed logical to change

But … each of their disciplines had a different explanation for this

And it said … people develop a distinctive ‘energy culture’ from the interactions between their norms (what they think is normal or appropriate), their material culture (their technologies and infrastructure), and their energy practices (what they do that uses energy)

And … these things become self-reinforcing, and they are also influenced by exterior forces like regulations and energy prices

They called this model … the Energy Cultures framework 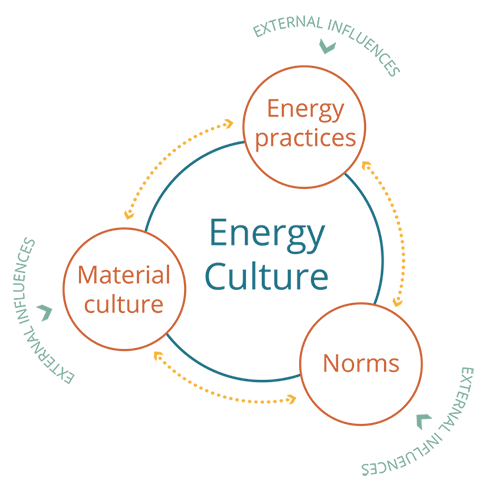 And, gradually… even though it was first just meant to help them work together, they realized that the model could help them understand why people behaved the ways they did, and how to help change behaviour

Firstly … they applied it to households’ heating behaviours

Secondly… they applied it to all energy behaviour in households

And now … they are using the model to help understand how transport systems are changing, and to understand the energy cultures of SMEs, and to compare NZ’s energy culture to other countries

And, to their surprise… people all over the world thought the model was really helpful, and they had many invitations to talk about it, and other people wanting to apply it in other situations

And so… the Energy Cultures Framework became quite well known as a new way of thinking about behaviour and change, and the Energy Cultures team grew to include many more disciplines. Now the team is working with other people in NZ and internationally to test and apply the model in different contexts.  Watch this space to see what happens next!