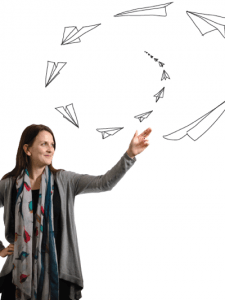 In industrialised countries across the world there have been reports of declining rates of licensure, car ownership and vehicle kilometres travelled by generation Y – people born between 1980 and 2000. The Energy Cultures project is exploring this phenomenon in New Zealand through two projects which include both younger and older generation Y participants:

This project is led by Dr Sandra Mandic at the School of Physical Education, Sport and Exercise Sciences. Using an ecological model and mixed methods approach this research examines transport to school, perceptions of transport modes, use of information communication technologies (ICT) and future intentions. Data are being collected during 2014 and 2015 from all Dunedin high schools, and involving students (14 – 18 year olds), parents, teachers and school principals.

This project is led by Dr Debbie Hopkins, and involves semi-structured face to face interviews with generation Y (18 – 35 year olds) from urban and rural locations across New Zealand. During 2014, 51 interviews were conducted in Dunedin (n=17), Auckland (n=17) and rural New Zealand (n=17). Both drivers and non-drivers were included in the study to explore the motivations and barriers to licensure, the perceived need to drive, perceptions of transport modes and the use of ICT to substitute physical travel and communicate with family and friends.

Through this research, we are aiming to gain a better understanding of the motivations behind licensure for generation Y, and the factors contributing to declining rates of licensure for this generation. We hope to inform transportation policy and planning though increased knowledge of future transport demands and modal choice for younger people, whose voices can often be neglected.

Data collection for the BEATS study is continuing through 2015, however preliminary findings were presented at the 2014 BEATS Study Symposium, the abstracts are available at the BEATS website: www.otago.ac.nz/beats/news

Analysis is currently underway on the 51 generation Y interviews. We are seeing quite diverse mobility cultures and resultant motivations for mobility decisions. In terms of non-drivers, there appears to be a group for whom licensing is not a priority and is therefore postponed, and another group for whom non-driving is a conscious, long-term decision.

A report on the generation Y mobilities project findings will be available in April 2015.