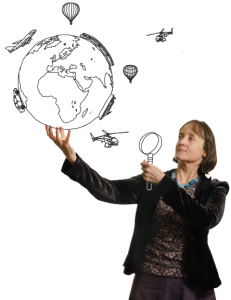 We are exploring what kinds of transport systems New Zealand might use in the future, with a special focus on energy-efficient transport. This research involves a structured information-gathering method called a ‘Delphi’ to see what experts think are the global innovations that might shape transport of the future, as well as trends and potential shocks that could lead to changes in transport systems.

Firstly we ran an International Delphi during 2013 with transport experts from many parts of the globe. They were interviewed about their perspectives, and then they took part in several on-line surveys, designed so that each survey built upon the findings of the one before. We discuss some of the findings in this presentation  and journal article .

Following the international Delphi, we carried out a similar exercise involving New Zealand transport experts (from the transport sector, councils, government and researchers).  Over four surveys we asked about things like their perspectives on trends and shocks that might affect NZ’s transport system, and what NZ’s future transport system might look like.  Some of the findings are reported in this presentation and this report.

Some highlights from the International Delphi:

Transport systems are the interactions of infrastructure, fuels, vehicles and other technologies, and the behaviours and expectations of firms, governments and the public. These interactions can create interdependencies which can be very hard to change. However, there are many new developments occurring internationally which are starting to create changes in transport systems, or are likely to in the near future. These may impact on New Zealand, and include:

New trends in travel behaviour, such as

Technological innovations, such as

Businesses seeing value in efficiency, such as