Getting the message out about cosy homes.

Home/Energy and Households, News & Updates, Team Blog/Getting the message out about cosy homes.

Getting the message out about cosy homes.

We would all like to live in a cosy, energy efficient home, but the reality is that this is out of reach for many New Zealanders, with a large proportion of housing being either inadequately insulated or not insulated at all.

This is a serious concern, since the World Health Organisation recommends that homes be heated to a minimum of 18°C with serious health implications if the temperature drops below 16°C.

As an undergraduate, I recall remember many flats, including my own, adopting strict ‘no heater’ policies to save money. During Dunedin winters we would lay huddled on the couch under a mountain of blankets watching our breath condense in the air.

For two months of the year our fridge became redundant as our living space frequently dropped below 5°C!

Although we may have saved a little money on energy bills, we were constantly cold and often sick.

So which method was better?

We found that participants who received personalised home energy audits were more likely to make changes to their households than those who attended community events. In fact, in one suburb, almost every participant who received a home energy audit made a variety of practical changes (from draft stopping techniques and inexpensive double-glazing alternatives to installing insulation) as well as behavioural changes (including closing curtains before sundown and switching off appliances on stand-by).

Six months after the audits, the participants reported that these changes had made noticeable improvements to their general comfort and wellbeing and in some cases substantially reduced their power bills.

Yet, whilst the community energy events were less successful in prompting large-scale household changes, they proved to be more effective when it came to recruiting participants, stimulating conversation and sharing knowledge across a much wider audience.

The events served as a forum for community members to publicly share their energy-saving progress. Community members who were usually too shy to participate felt empowered by their peers and most people came away with a general understanding of how to improve the energy efficiency of their homes.

Given that both methods have their strengths, we believe that combining community-driven events and personalised home energy audits in a two step process is probably the most effective way of promoting cosy, energy efficient homes.

If we could roll this out Dunedin-wide, it might lead to decreased illness and hospital visits during the winter months, making homes more comfortable for all, and perhaps some students’ will have use for their fridge again!

I’d be interested to hear your thoughts on this in the comments section below. 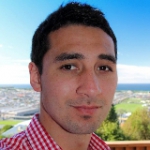 About the Author: Alaric McCarthy