Multidisciplinary research on energy is a hot topic internationally.  I’ve recently returned from a trip overseas to give presentations and work with other research teams in England, Ireland, Germany and Norway, and I spoke with a number of research groups where they have recently started to work collaboratively across disciplines.  They have huge interest in our Energy Cultures project, and how we work together as an interdisciplinary team.

Traditionally, energy was seen as mainly as a ‘physical science’ topic, with engineers and physicists focusing on new and more efficient forms of energy supply, transmission and consumer technologies.  These days we are starting to see much more involvement from social scientists such as economists, psychologists, sociologists and policy analysts.  And a lot of investment in energy-related research by companies and governments.

Why is this?  In Europe, concern about energy security and climate change are driving big changes in energy supplies and energy consumption. Energy security in that part of the world is highly influenced by politics.  Energy is the lifeblood of economies, and the potential for disruptions in supply means that there is strong interest in developing better policies, plans and market arrangements for cross-national supplies of gas and electricity; in avoiding unnecessary wastage of energy in transmission and use; and in developing as much supply within national jurisdictions as possible.

One example of vulnerability that Europe is criss-crossed with energy transmission lines (electricity and gas) running between countries, with immensely complex supply arangements, as they try to minimise their energy costs while dealing with variations in seasonal supply and demand. On top of this are political tensions, such as between Eastern Europe and Russia, which could have implications for the gas supplies that Russia pipes through Eastern Europe and sells into Europe.

There are also political tensions over energy within countries.  For example, Germany is a federation of states, each of which has relative independence. After the Fukushima nuclear disaster, Germany decided to gradually close down all of its nuclear power plants and move to renewable energy generation.  Wind farms have been proliferating in northern Germany and its offshore areas, which is where the best wind is, but the energy is needed in the south of Germany where most industry is located.  The intermediate states don’t want new transmission lines, and are trying to block it.  Sound familiar, anyone?

The other driver of change in energy systems is to reduce greenhouse gas emissions.  The vast majority of all energy used across Europe is still fossil fuels: coal and gas in generating electricity and heating, and petrol and diesel in transport systems, and these are the main sources of greenhouse gas emissions.  European Union directives have seen huge efforts across Europe to reduce GHG emissions over many years, at a higher level of commitment that required under the Kyoto Protocol.  The 20:20:20 targets adopted in 2008 aim, by 2020, to reduce emissions of greenhouse gases by 20%, to increase energy efficiency to save 20% of EU energy consumption, and to reach 20% of renewable energy in the total energy consumption in the EU.

Tavelling through Europe today, the impact of this and similar policies are really evident, and show how seriously nations are taking the need for climate action.  Wind farms dot the landscape and shalllower parts of the English Channel and North Sea; photovolatic panels can be seen on roofs everywhere; homes are superbly insulated and double or triple glazed as a matter of course; public transport systems are generally efficient and seamless, with new electric trains and buses everywhere (electricity may still be mainly sourced from fossil fuels but, used for motive power, is a much more efficient use of the power than internal combustion engines); and most cities I visited had public bicycle schemes and numerous electric vehicle charging stations.

Both of these drivers – energy security and climate change – are driving action by governments, businesses, councils, and individuals to achieve resilient and sustainable energy systems.  And research funding is also changing, so that increasingly they are funding interdisciplinary research teams.  Because this isn’t just about a technical change from fossil fuels to renewables; its about changes in the way people interact with energy in their everyday lives, in the way businesses operate around energy, in policy and market arrangements. 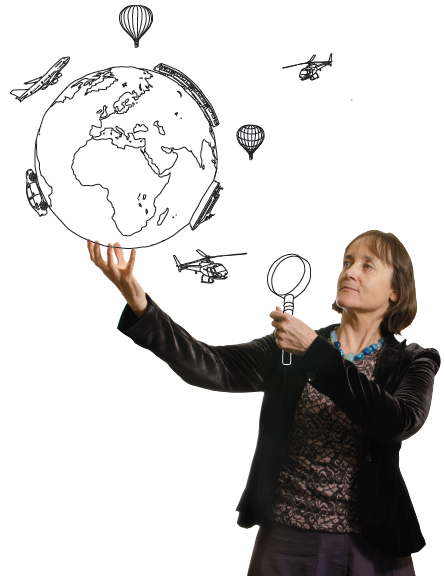 So where does New Zealand fit in all of this?  Obviously we lag well behind Europe in many of the changes I’ve talked about, and that’s a topic for another column.  But we’re up with or ahead of the game in others.  A German energy economist I spoke with was astonished to hear that wind farms are profitable here, and do not require subsidy; and also that we are seeing an upsurge in households and businesses installing PV despite there being no subsidised feed-in tariff.  New Zealand has a huge natural advantage with its renewable energy and the readiness of people to get involved in new ways of doing things.  Other countries can learn a lot from this.

And also, I found, they believe they can also learn a lot from the approach and work of the Energy Cultures team.  Wherever I spoke there was fascination in how we worked effectively together across such a wide range of disciplines; interest in the Energy Cultures Framework as a conceptual model to help understand energy behaviour; and (always) the question ‘When can we visit you in New Zealand?’.  It is exciting to think that our Energy Cultures research can contribute internationally to the inevitable transformation in the ways that energy is supplied, managed and consumed.

Let me know your thoughts below

About the Author: Janet Stephenson

Dr Janet Stephenson is a social scientist and Director of the Centre for Sustainability at the University of Otago.