We have a long way to go

Home/News & Updates, Team Blog/We have a long way to go

We have a long way to go

I came back from five months of research and study leave in November 2014, having spent the majority of the time in Vienna, Austria (a city of 1.8million with a much smaller footprint than Auckland). Austria is a long time member of the EU and has a climate with more extremes than New Zealand. Vienna is also a very old city, with small sections of pavement from the 1500s still in place. The housing is certainly not the “quarter acre dream”. It is different, not worse or better. Well, it is better for the environment and public transport — higher density housing makes public transportation efficient.

The conversations around transportation and household energy use are everyday. Mainstream newspapers (there are more than six in Vienna alone) frequently devote sections (not advertorials) to discussions of home energy efficiency, new transportation technology, modal shift, etc.

It is entirely normal for Austrian drivers to discuss how many litres they need per 100km. All new cars monitor it and before that drivers monitored it. Driving well, is driving efficiently. That is not to say that there aren’t drivers going too fast, or driving inefficiently, but they are much less in evident that in New Zealand. 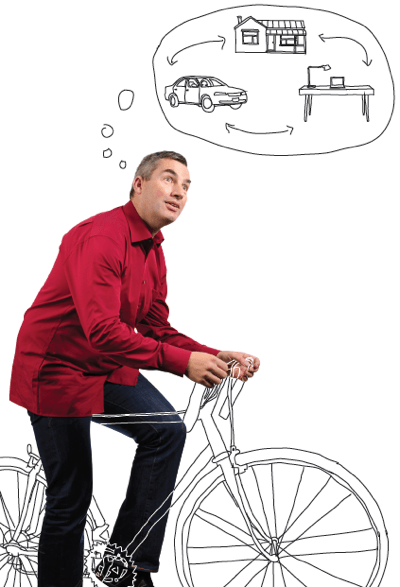 careless and simply angry around cyclists. In Austria those drivers are very rare — in five months I didn’t encounter a single one. In New Zealand I encounter one most days.

The public transportation system in Vienna is world class. We almost never looked at a timetable, because the service is so frequent that you rarely need to wait more than a couple of minutes. Weekly or monthly tickets are relatively cheap and yearly passes are very good value.

In Vienna personal travel is made up of 39% public transport, 6% bicycle, 27% walking, 8% as a passenger in a car and 20% driving a car — 2013 figures are the latest available (http://www.nachhaltigkeit.wienerstadtwerke.at/daseinsvorsorge/oepnv/modal-split.html). The city of Vienna is aiming to increase the active and public transport in the coming years, and they are putting significant resources behind that change.

Coming back to New Zealand, I find cyclists being treated in a very “out group” manner (http://www.stuff.co.nz/national/65459656/anticyclist-facebook-group-not-a-hate-page), the lone driver in the car as the norm, public transport seen as a ‘second (or third) choice’ and very small pockets of discussion around energy efficiency and behaviour.

We have a long way to go.

Ben is an Associate Professor in the Marketing department at the University of Otago, and Secretary of the Macromarketing Society Inc.

About the Author: Ben Wooliscroft